The Abdication Crisis - Part One

PART TWO - THE ABDICATION AND AFTERMATH

After a tumultuous early December 1936, King Edward VIII had been left with two options.  The first, give up any thoughts of marriage to the twice divorced Wallis Simpson, and remain King. Or abdicate and marry. The government, under Stanley Baldwin, was unwilling to consider necessary legislative changes that might have enabled the marriage on any terms, and the King was equally determined. The result was inevitable.

On December 10th, 1936, at his Fort Belvedere retreat, the King signed the Instrument of Abdication, in the presence of his three brothers, who also countersigned the document. 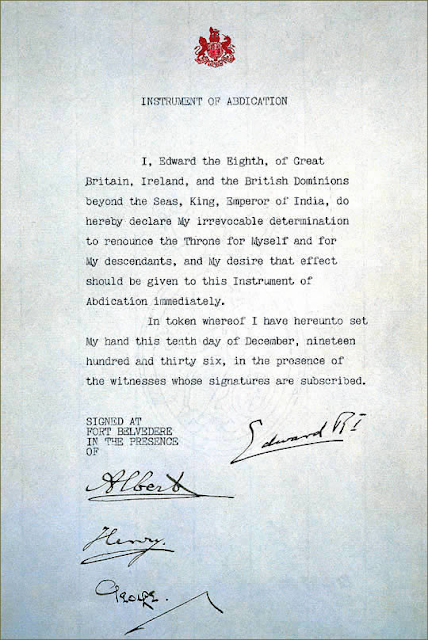 The following day, the former King broadcast to the Empire on the BBC, and was introduced as His Royal Highness, Prince Edward;

"...At long last I am able to say a few words of my own.  I have never wanted to withhold anything, but until now it has not been constitutionally possible for me to speak.  A few hours ago, I discharged my last duty as King and Emperor, and now that I have been succeeded by my brother, the Duke of York, my first words must be to declare my allegiance to him.  This I do with all my heart..."
"...I now quit altogether public affairs and lay down my burden.  It may be some before I return to my native land, but I shall always follow the fortunes of the British race and empire with profound interest, and if at any time in the future I can be found of service to his Majesty in a private station, I shall not fail..."
The key  element of the speech, and probably the best known, was his succinct explanation of his reasons;
"...But you must believe me when I tell you that I have found it impossible to carry the heavy burden of responsibility and to discharge my duties as King, as I would wish to do, without the help and support of the woman I love..."
The speech can be read in its entirety here;

The following summer, the former King, now Duke of Windsor, and Wallis Simpson,  were married in France. None of the Royal Family attended, and celebrations were dampened by  the fact that the new Duchess would be denied royal rank (HRH; Her Royal Highness).   The rift in the royal family was now beyond repair, with anger and bitterness on both sides.  There ensued  arguments over the Duke and Duchess's financial settlement, when it was discovered that the Duke had not been entirely honest about the extent of his personal wealth, claiming he had around 90 000 pounds to his name, when he actually had saved as much as 1 000 000 pounds from his royal revenues.

You can listen to a number of  fascinating first-hand recollections of the wedding, and the preceding crisis, thanks to the BBC Witness History programme.  Link here;

The Duke's younger brother Bertie, Duke of York, had succeeded as George VI.  After an anxious beginning, it soon became apparent that his work ethic and adherence to the old traditions set him apart from his wayward brother.  He had a clear understanding of what was expected of him, his first duty, in his own words, to stabilise this rocking throne.   The subsequent coronation had a healing effect upon the nation, and even supporters of the former King fell in to line.  On observing the blessing of the Queen Consort as part of the Coronation ceremonies, Winston Churchill, according to his daughter Lady Soames, commented to his wife Clementine; you were  quite right, the other one would never have done.

The previously warm relationship between Winston Churchill and the former King soon cooled.  In 2001, the Telegraph reported on 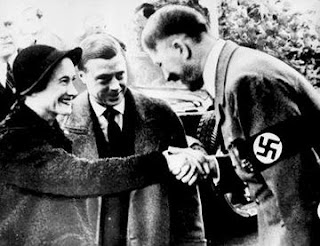 Churchill's frustration at the Duke's clumsy attempts to meddle in British foreign affairs, and over a number of petty demands  made around the time of the Duke's appointment as Governor of the Bahamas in 1940. Questions were raised over the Duke and Duchess of Windsor's alleged Nazi sympathies, and even of a plot to restore him to the throne in the event of Nazi annexation of Great Britain.

The Duke's tenure as governor ended in 1945, after which the Duke and Duchess lived in Paris as society retirees.

In 1969, the Duke and Duchess granted an interview to the BBC, during which they talked about their lives in Paris society.  The Duchess told the reporter;

"...I have a great many young people come here because that makes me feel young.  They behave like we did when we were young...They do little dances I don't know, they show them to me and we all try..."

"...The Duchess and I are a little past the age of  being what they call with it today...But don't  for one minute imagine that we weren't with it when we were younger, in fact, I was so much with it, that that was one of the big criticisms that was levelled against me by the older generation..."


The Duchess described her husband as ahead of his time, and observed that the Establishment, during the time the Duke had been Prince of Wales, had not been ready for his desire to modernise the business and image of the Royal Family,

"...He was very interested in everything that was going on, in people...he made a lot of trips, not only ceremonials but to go down among the people, which, for me as an American, is what I'm used to people doing, and I thought  that was very clever..."

The Duke told the BBC interviewer that he had offered his services to Britain, but had been rebuffed.  He wouldn't be drawn on why no job offer had been forthcoming, but made the point that most the the people who had prevented his return to any kind of public service were now underground.  Other reports suggested that the Duke's acceptance of any such role would be conditional upon the Duchess finally receiving her HRH, the absence of which remained a festering source of resentment. Inevitably, the stalemate remained.

In the absence of any meaningful work, the Duke and Duchess spent their time socialising, travelling in Europe, and overseeing their investments.  The Duke himself remained a keen golfer, but household sources suggested that this was not the kind of life that either Edward nor the former Mrs Simpson had envisaged for themselves, and they both regretted their inability to be useful.   On nights in which there were no parties or interesting company as a distraction, the mood was apparently often silent and a little bleak.

The Duke died of throat cancer in 1972, at which time his body was flown back to England by the RAF, for a traditional lying-in-state and subsequent funeral service at St George's Chapel, Windsor.  Thousands of people, queuing for miles and waiting for hours, as the Associated Press reported, came to pay their respects. The Duchess of Windsor was afforded a royal fight to Britain and accommodated at Buckingham Palace, after the Queen had visited them in Paris in the Duke's final days, where it appeared there was some resolution of the family rift. The Express reported that even the Queen Mother agreed to the attend services at the graveside, in a further gesture of reconciliation.

In the ensuing years, the Duchess' own health declined.  She died in 1986, having unsuccessfully tried to stop the award winning Thames Television series, Edward and Mrs Simpson, which aired to great acclaim in 1978.

The Duchess was buried alongside her husband in the Royal burial ground, Frogmore.  The service, also in St George's chapel, was described as simple and stripped of all trappings of state.  The Royal Family, including the  Queen Mother, were all in attendance.

Here is a contemporary (BBC) news report of the funeral. 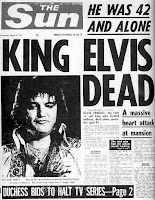 The Sun from the Summer of 1977. The death of Elvis predictably dominates, but it's interesting to note reference to the Duchess at the bottom of the page.

The mini-series, Edward and Mrs Simpson, starred Edward Fox as the King and Cynthia Harris as Wallis Simpson.   It appears to be historically accurate, with scenes actually shot at Fort Belvedere, and including verbatim re-creation of speeches, public and private.  The art direction, costumes and performances bring you as close to the 1930s as you could possibly be without a time machine.  Perhaps there is an argument that the portrayal of the the Prince of Wales, then King, was just a little too sympathetic, something that was remedied years later in a drama more from the point of view of the Duke and Duchess of York, Bertie and Elizabeth. 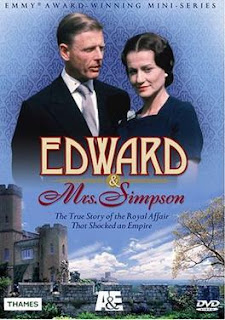