The 1987 UK General Election saw the emergence, for the first time, of three MPs of African and/or Caribbean background, all on the Labour side. Bernie Grant was elected MP for Tottenham, Paul Boateng for Brent South,  and Diane Abbott for Hackney North and Stoke Newington.

It's interesting to note that the first MP of South Asian background was Dadabhai Naoroji, who served as Liberal MP for Finsbury Central (1892-95) and had been one of the founding fathers of the Indian National Congress in 1885. On the Conservative side, Sir Mancherjee Merwanjee Bhownaggree served as MP for Bethnal Green Northeast from 1895-1906.  These two pioneering MPs don't take into account the presence of David Dyce Sombre, an Anglo-Indian, who had a fleeting career as MP for Sudbury, but was unseated for corruption in the 1840s.


Bernie Grant
Bernie Grant is described as one of the most charismatic black political leaders of modern times, on the website 100 Great Black Britons.  Tony Blair said that he was an inspiration to Black British communities everywhere.

Bernard Alexander Montgomery (Bernie) Grant was born in 1944, in British Guiana, now Guyana.  He arrived in Britain at the age of 19, and began working for British Rail.  He soon became active in  trade union affairs, including the Black Trade Unionists Solidarity Movement, and after a decade as a Councillor for the London Borough of Haringey, was elected as its leader in 1985.  He was the first black leader of a local authority, and at the general election of 1987, was elected Labour MP for Tottenham.

Bernie Grant was seen as being toward the radical socialist Left of the Labour Party, and earned a reputation for outspokenness and independence.  He fought against racism and discrimination on the basis of gender or sexuality, advocated for those with disabilities, and worked tirelessly for social justice.

His career was not without controversy.  Following rioting in the Broadwater Farm area of his borough in 1985, resulting in the death of a police officer, Grant opined that the general feeling within the community was that the police had been given a bloody good hiding.


"...Even those who characterised him as rash and hasty, acknowledged that he was likeable, charming, generous to friends and enemies, and relentlessly honest.  Those closest to him understood that he never accepted the dogmatic positions of faction and party.  He had a passionate devotion to an ideal of justice, and be believed that politics was about these notions..."

Read in more detail about the life and professional achievements of Bernie Grant here;

Paul Boateng was born in London in 1951.  He spent his early years in Ghana, his father being a Cabinet Minister in the Ghanaian government.   Following a military coup in 1966, his family returned to England, and by the late 1970s, Paul Boateng was building a reputation as a crusading housing and civil rights lawyer in Lambeth, South London.  He was elected to the GLC (Greater London Council) in 1981, and served on the police and ethnic minorities committees.  As chair of the police committee, he fought for  greater accountability from the Metropolitan Police, particularly in their dealings with minority and disadvantaged communities. He was elected as Labour MP for Brent South at the general election of 1987.  He was part of the move toward a more moderate ideology that was emerging under the leadership of Neil Kinnock, and served in a number of key Opposition posts.


Ten years later,  Tony Blair's New Labour  defeated the Tories under incumbent Prime Minister John Major, consigning them to Opposition for the first time since 1979.   Boateng  served as a junior minister for Health and Home Affairs, and as a financial secretary at the Treasury.

In 2002, he achieved another milestone, when he was promoted to Chief Secretary to the Treasury, becoming the first black member of the Cabinet.   He did not seek reelection in 2005, and subsequently served as British High Commissioner to South Africa. In 2010 he was granted a Life Peerage, as Baron Boateng of Akyem and Wembley.

Of his background, he once said;

You can follow Lord Boateng's latest work at his official parliamentary page here; 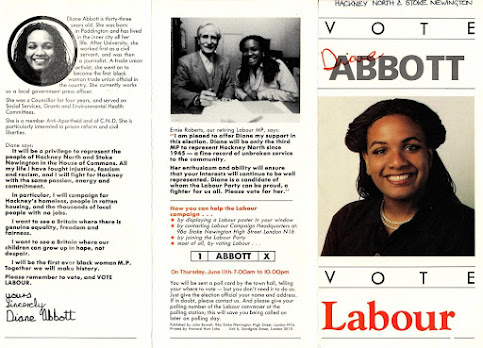 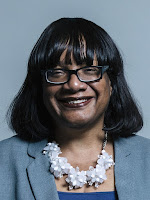 Diane Abbott was born in Paddington, London in 1953, to Jamaican parents.  Having achieved a Masters Degree in history at Cambridge, she went into the Civil Service, then worked as a journalist, broadcaster and PR Consultant.  She was active in the National Council for Civil Liberties, and in the general election of 1987 was elected Labour MP for Hackney North and Stoke Newington, becoming Britain's  first black female MP.

Her areas of particular interest include human rights  and justice, in Britain and abroad.  Like her fellow class of '87 MPs featured here, she has also been a vocal - and at times controversial - on issues around race-relations, social and class issues, policing ethnically diverse and minority communities, and the relentlessly controversial issue of police stop-and-search powers.  She founded the London Schools and the Black Child initiative, to work towards greater equality in education, as well as Black Women Mean Business, to  encourage and support black women entrepreneurs.

Her poor media performance during the 2017 election campaign attracted widespread criticism, although she later explained that her Diabetes had been poorly managed during this period of intense personal pressure.  In spite of her stumbles, her personal popularity was undiminished, and she won in a landslide, with a constituency majority in excess of 35 000, or 75.1% in percentage terms.

She served as Shadow Home Secretary under leader Jeremy Corbyn, however stood down in February 2020.

You can listen to Diane Abbott's 2008 interview on the BBC's Desert Island Discs programme here; 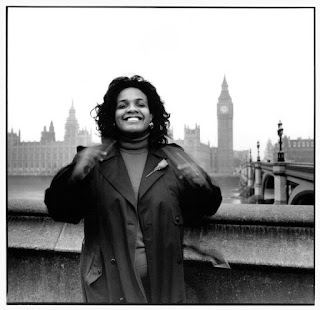 Diane Abbott (Official)
The first Conservative MP of African or Caribbean background is Adam Afriyie, MP for Windsor since 2005, and who has Ghanaian heritage.  Link here to his parliamentary web page;

The focus of this piece has been purely on the first black MPs in Britain.  It's worth noting also that at the general election of 1987, Keith Vaz  won the constituency of Leicester East, and was the longest serving MP of Asian background until his controversial career ended in late 2019.

Sources and credits (other than already specified in main text);


Post sponsored by the Armstrong and Burton book series.


An ongoing important character in the Armstrong and Burton series is Janice Best, Tory MP for the fictional constituency of Streatham and Vauxhall, from 1979 to 1987.  Janice is the only black MP in our slightly adjusted Conservative Party, and serves briefly as a junior whip, then as Parliamentary Private Secretary (PPS) to Sir Norman Armstrong at the Home Office.