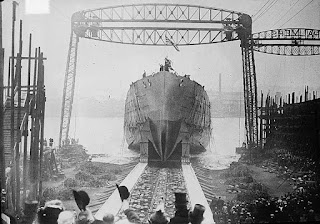 By 1936, the global Great Depression was laying waste to major economies across the world.  Areas that relied largely upon heavy industry, like the Northeast of England, were hit particularly hard. On the southern bank of the River Tyne, Jarrow was just one of many industrial towns ravaged by poverty and unemployment.  Meanwhile, the National Coalition Government under Conservative Prime Minister, Stanley Baldwin, appeared to be looking the other way.

Baldwin himself was a champion of One Nation Conservatism, yet for some of the worst affected areas,  the reality of the government’s economic management appeared to remain very much laissez-faire.

New, or One Nation Conservatism had seen Prime Minister Baldwin steer the Tory ideology toward a much more compassionate, inclusive and interventionist  position, at least in theory.   Nineteenth Century Prime Minister Benjamin Disraeli had contended that the divide between rich and poor had rendered Britain two nations, between which there was no intercourse and no sympathy.

“...We stand for the union of those two nations of which Disraeli spoke two generations ago: union among our own people to make one nation of our own people at home which, if secured, nothing else matters in the world..”

“...Tory policy was reshaped to advance the cause of One Nation. Social reform became the Party’s dominant preoccupation for the first time in its history. The Conservative Party, Baldwin declared at the 1929 election, regards the prosperity of trade and industry, not as an end in itself, but as a means to improve the condition of the people…”

It would be fair to observe that Jarrow, and many places like it, by design or accident, remained outside of Mr Baldwin’s envisaged single nation.

Here are some recollections from Jarrow residents, as told to the BBC in 1986:

“...Pathetic.  The Jarrow of those days was a filthy, dirty, fallen down consumptive area in which the infantile death rate was the highest in the country, and TB was a general condition…”

“...There was no work. No one had a job except a few railwaymen, officials, the workers in the co-operative stores, and a few workmen who went out of the town...The plain fact is that if people have to live and bear and bring up their children in bad houses on too little food, their resistance to disease is lowered and they die before they should...”

Palmer’s Shipyard, the principal source of employment since 1851, had closed down in 1934.  Many proud, skilled workers were now unemployed, and could no longer provide for their families.

Government unemployment benefits in those days lasted six months, after which responsibility was handed to the Unemployment Assistance Board, from which any tangible support was difficult to access and ultimately far from adequate.  Eligibility was also subject to the Means Test, first introduced in 1931.  This meant that the combined wages and assets of all members of the household were taken into account when deciding whether or not unemployment relief should be forthcoming.
During an interview with the BBC in 1976, Jean Clarke, who was one of the small minority lucky enough to remain in work, recalled the shattering personal effect of unemployment on individuals, her own father included;
“...It was rather hard on the family, as well, to watch...Week by week you could see them all getting  a little more morose, trying to keep cheerful, but the effect it had on them, you could begin to see it showing in their own faces, judging from my own father, sitting in a chair, head on hand, dreaming…”

Facing indifference from Westminster, and the admonition that Jarrow would have to sort out its own problems, the local Borough Council initiated a non-partisan campaign to try to bring employment, in the form of a new steelworks, back to the area.  Two hundred unemployed men, selected from a pool of around 1400 volunteers, would march more than 280 miles to London to petition the government to establish new industries.

The marchers set off at 11 am on October 6th, 1936.   As the Manchester Guardian reported, it wasn’t a hunger march, but a protest march.  This was an important distinction in the context of the times, as the hunger march movement was seen as a communist initiative one short step away from revolution, and a movement from which the mainstream Labour Party was keen to keep its distance.  The Guardian also pointed out that at that time, less than 15% of the eligible Jarrow workforce was actually in work.

“... The unanimity of the protest that Jarrow is making to the rest of the country is indicated in the fact that the political parties represented on the Jarrow Town Council have agreed to bury the political hatchet to the extent of holding no elections this November. Further, although the town cannot by law spend a farthing of the ratepayers’ money on this demonstration, the labours of its Mayor in the despatching of about 200,000 letters to other corporations, trade unions, co-operative societies, and similar bodies at the expense of the march fund has raised that fund to £850, and it is hoped to have the round £1,000 before the marchers reach the Marble Arch on October 31…”

The Guardian went on to discuss the unified nature of the protest.

“...There is no political aspect to this march. It is simply the town of Jarrow saying send us work. In the ranks of the marchers are Labour men, Liberals, Tories, and one or two Communists, but you cannot tell who's who. It has the Church's blessing; in fact, it took the blessing of the Bishop of Ripon (Dr. Lunt) and a subscription of £5 from him when it set out today. It also had the blessing of the Bishop of Jarrow (Dr. Gordon)...

With the marchers goes, prominently carried, the Jarrow petition for work, a huge book with about 12,000 signatures, which Miss Ellen Wilkinson, M.P. for Jarrow, is to present at the bar of the House of Commons on November 4th. Miss Wilkinson met us outside Killinghall this afternoon and became the only woman in the procession…”

It is clear from a number of accounts that the progress of the march was celebrated and the participants were welcomed warmly as they passed through villages and towns along the way.

“...Harrogate welcomed the Jarrow Marchers today as cheerfully as if they were a relief column raising a siege. The music of the mouth-organ band might have been that of the bagpipes so surely did it bring the people flocking, and when the two hundred reached the Concert Rooms there were hundreds of folk drawn up on the slopes around to cheer them. The police were in attendance and there was a big banner raised saying, Harrogate workers welcome the Jarrow Marchers. At the Drill Hall, the headquarters for the night, the crowd was even denser...It was the same today all along the road from Ripon. The villagers of Ripley and Killinghall rushed to their doors to see the marchers pass; motorists waved as they went by; one shouted, How are you sticking it? and a woman cried, Hello, Geordies. And the Geordies themselves were in great form…”

The Guardian went on to applaud the generosity of the supporters, from both Jarrow itself and along the route of the march, and marvelled at how well the march was being run.

“...The organisation seems well-nigh perfect. It includes a transport wagon - a bus bought for £20 and converted - which goes ahead with the sleeping kit, waterproofs for every man worn bandolero fashion, 1s 6d. pocket-money and two 1p. stamps a week, medical attention, haircutting (and shaving for the inexpert), cobbling, accommodation at night in drill halls, schools, church institutes, and even town halls, and advance agents in the persons of the Labour agent at Jarrow, Mr. Harry Stoddart, and the Conservative agent, Mr. R. Suddick, who work together in arranging accommodation and getting halls for meetings…”

It's interesting to note here how opposing political machines from Jarrow were seamlessly working together.  As a gesture, The Guardian observed, the march was proving to be a bounding success.

One marcher later recalled to the BBC, in 1977;

“...The spirit of the men was such that we were expecting something.  We were expecting to prove to the capital, at that time, that here’s men from Jarrow.  The spirit they had shown all the way down...Here we are, we want work and we are going to put our case that we must have work for the benefit of our wives and children…”

Unfortunately, the high spirits and sense of unity and optimism would be short-lived, as the attitude of the government in Westminster proved to be less than welcoming.  On the 14th of October, the Cabinet met at 10 Downing Street, during which the Home Secretary, Sir John Simon, suggested that compliant journalists be recruited to report on the march in such a way as to deter public assistance and support.  It was also decided that the marchers would not be officially acknowledged by the government, and that deputations would not be received under any circumstances.  The Cabinet further agreed that the futility of any protests of this nature should be made abundantly clear to the public, lest any other groups should decide to embark on a similar course.

The marchers reached London after 22 days on the road; exhausted, yet fit, well fed and in good spirits.  A rally was held in Hyde Park, followed subsequently by the official presentation of the petition to parliament by  Ellen Wilkinson MP.  The government remained unmoved, and there proved to be little or no immediate effect on economic or industrial policy.  The men returned home by train, courtesy of donated tickets, with apparently nothing to show for their nearly 300 mile march.

Even the Labour Party itself was, at best, lukewarm in its support.  Ellen Wilkinson had addressed their Edinburgh conference on the issue of Jarrow, but had found the agenda dominated by discussions of the Spanish Civil War and issues surrounding rearmament.   There was even criticism of the idea of the march itself, and the physical burden it placed on unemployed and starving men.

“...If the march achieved anything...it made the condition and lives of people a factor that  should  always be brought into consideration at the top level... and not left to work out their own salvation…”

The next general election was held nearly a decade later, in 1945, as World War Two was coming to an end.  Memories of the Baldwin and Chamberlain National Governments and the desperate times of the interwar years would be a key factor in the landslide victory for the Labour Party, which promised a radically different approach in the way that Britain was to be governed.  Sam Rowland might have been right.

According to the BBC World Service, the last surviving participant of the march died in 2003.

The Guardian, BBC News and multiple other sources however, name the last survivor as Con Shiels, who died in 2012, and who had felt that the march had made not one hap’orth of difference.


You can listen to some first hand recollections here, thanks to the BBC World Service podcast, Witness, which was a research source for this article; 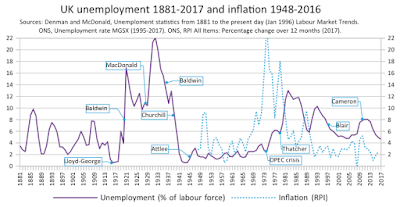 
Post sponsored by the Armstrong and Burton Book Series